Balboa is an urban fitness start-up. We designed their first fixed location – Balboa Bar & Gym – in the banking district of Zurich. The design is based on functionality, authenticity, collectivity and openness. The goal was not only to create a new place-to-be, but further to challenge common perception of what “fitness” is about and to open up the Balboa community to grow beyond gymgoers. People and interaction are in the center of the concept.

The concept mixes two uses that normally would not be considered a “match”. The ground floor works as a regular, fully-fledged bar and the gym is located downstairs. This unorthodox mix is celebrated in the architecture. Generous roughly cut openings allow for visual connections between the two floors and their partly differing clientele – and also bring natural light in to the basement. The connecting effect is amplified by lighting. Further ample uncovered windows connect the bar to the outer world. Inside, the long copper bar, wide concrete drinking fountains, a big communal table and the „mixed-zone“ downstairs (housing shared toilets) are designed as places of encounter.

Balboa Bar & Gym is located in the ground floor and basement of an existing modernistic office building from the 60’s. For functionality the spatial organization was optimized, new connections between the floors were added to make the most out of the available space in all three dimensions. To stay true to urban spirit Balboa’s (and in order to deal with the tight budget) the look and feel was kept functional and authentic. Surfaces were, when possible, left as found or toned to an allgrey palette. The reduced backdrop was then contrasted with black steel, a few splashes of signal red, copper, light beech wood and cognac leather to add graphic accents and warmth. 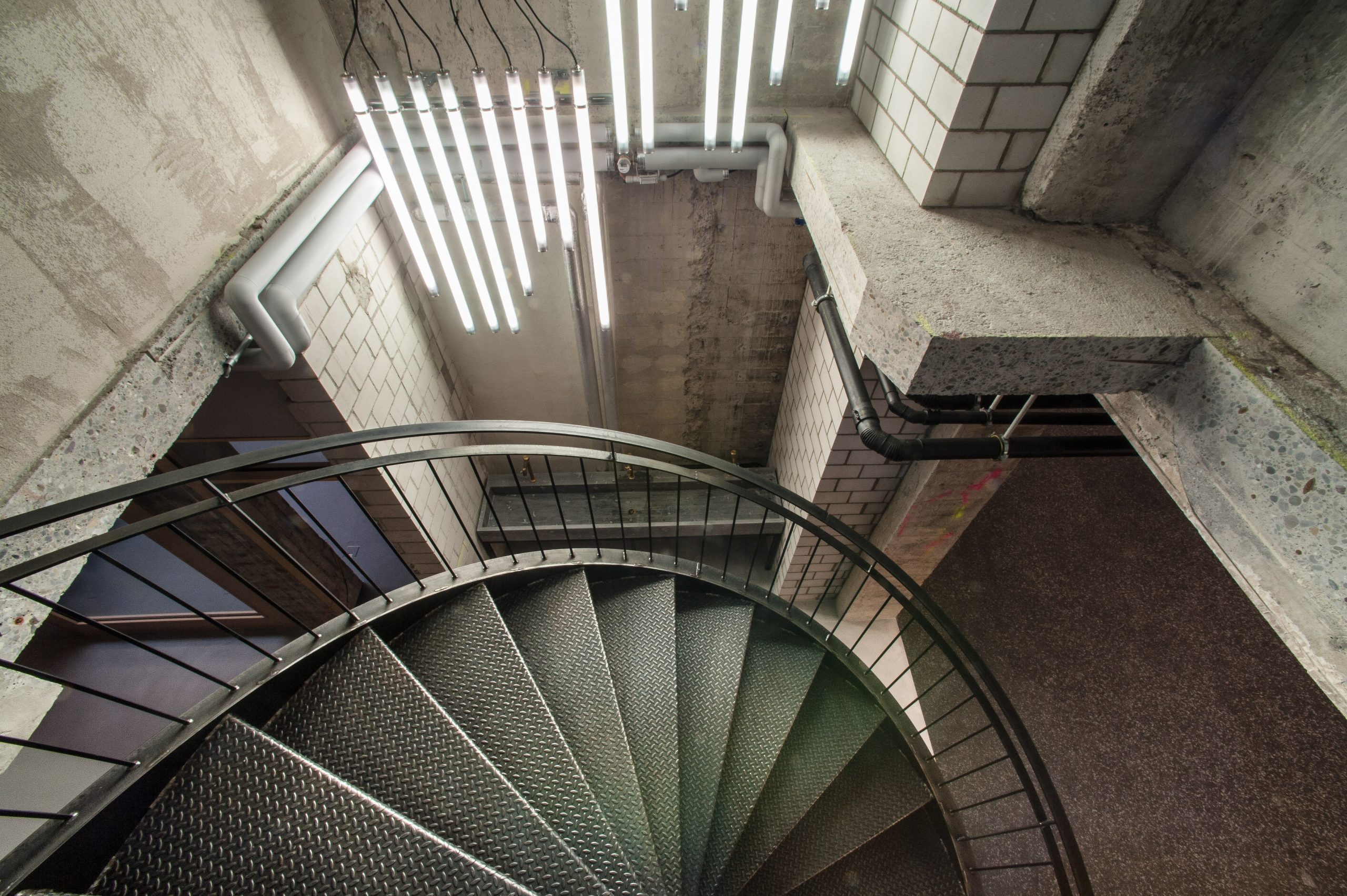 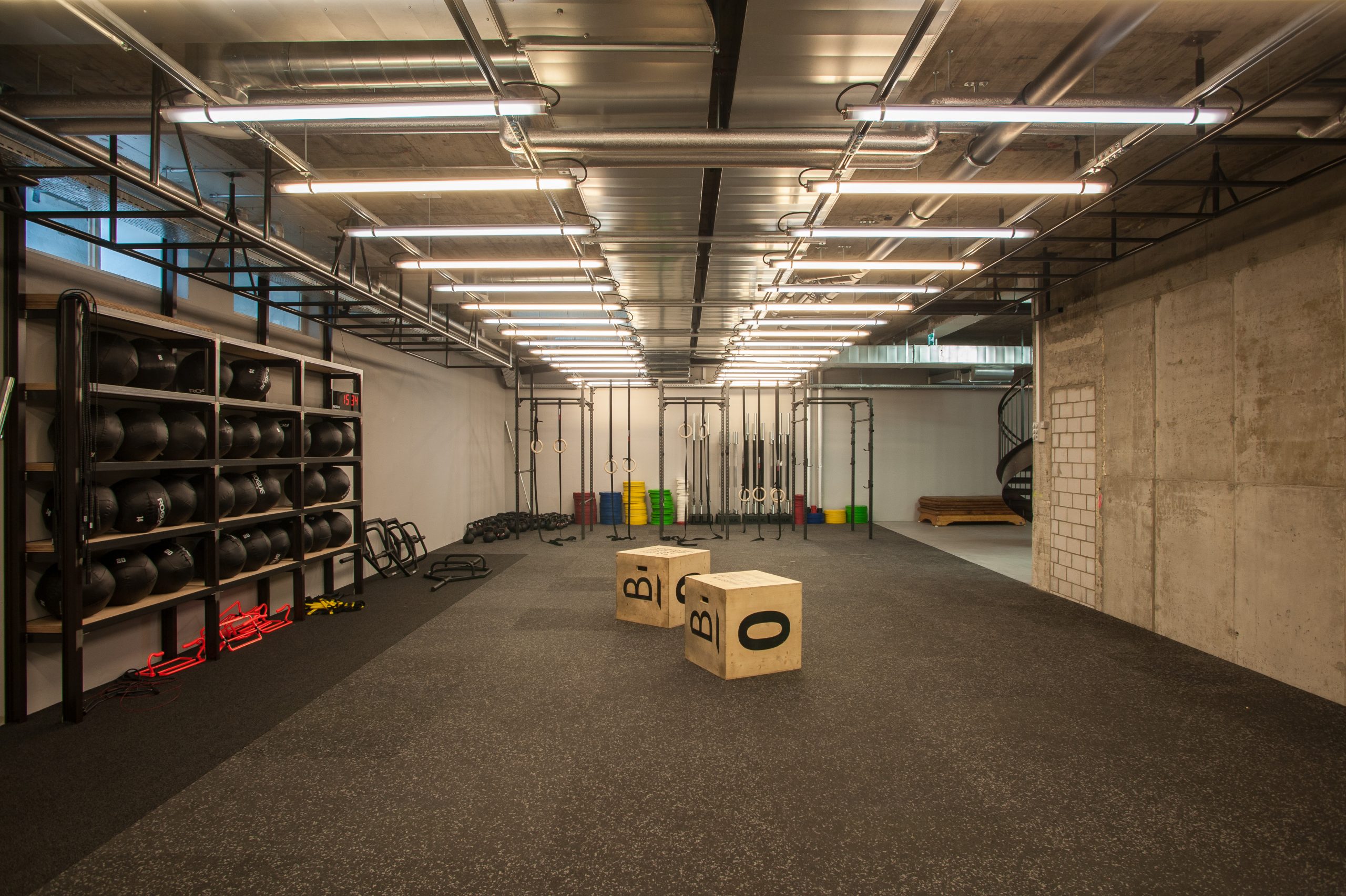 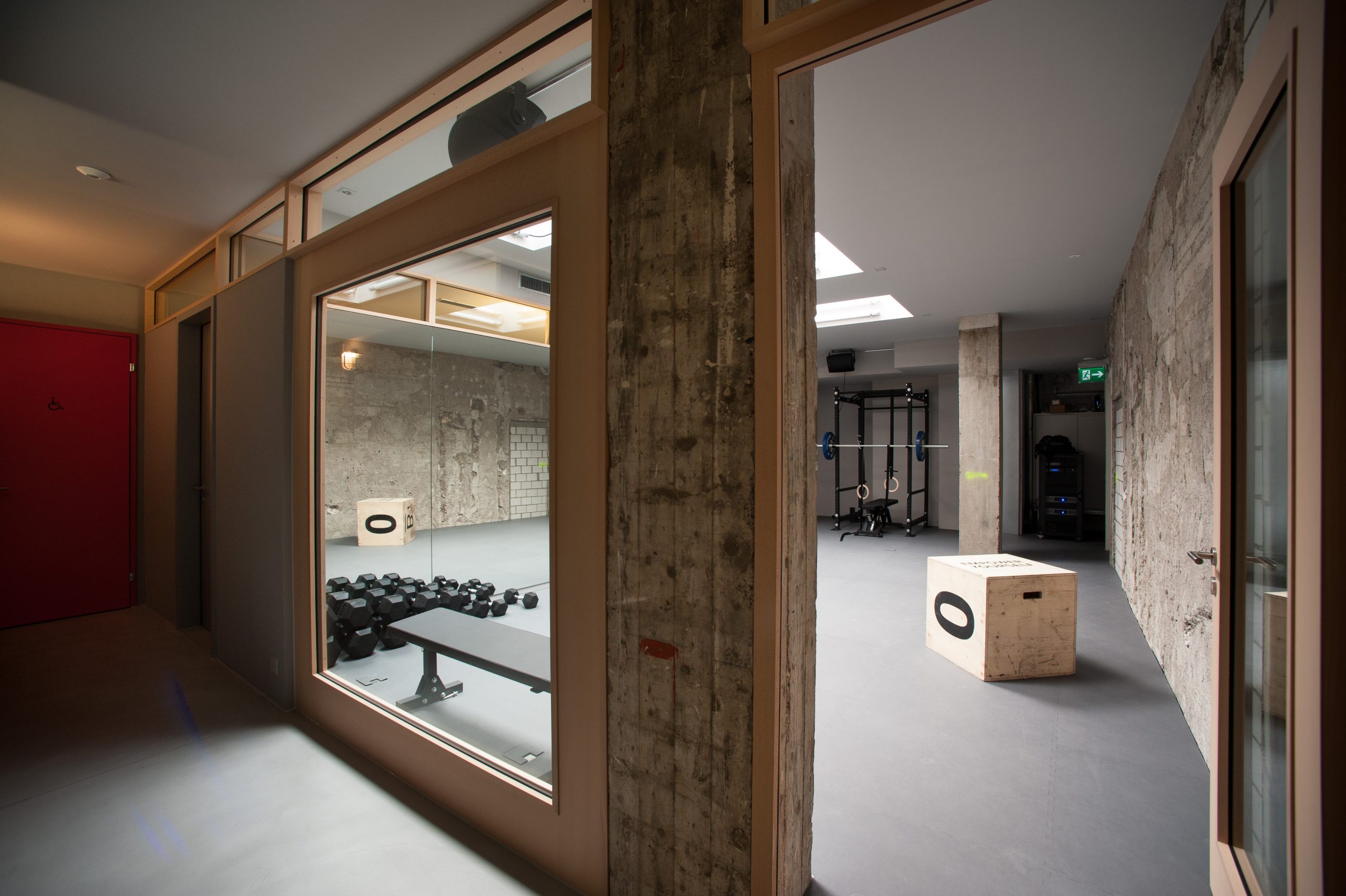 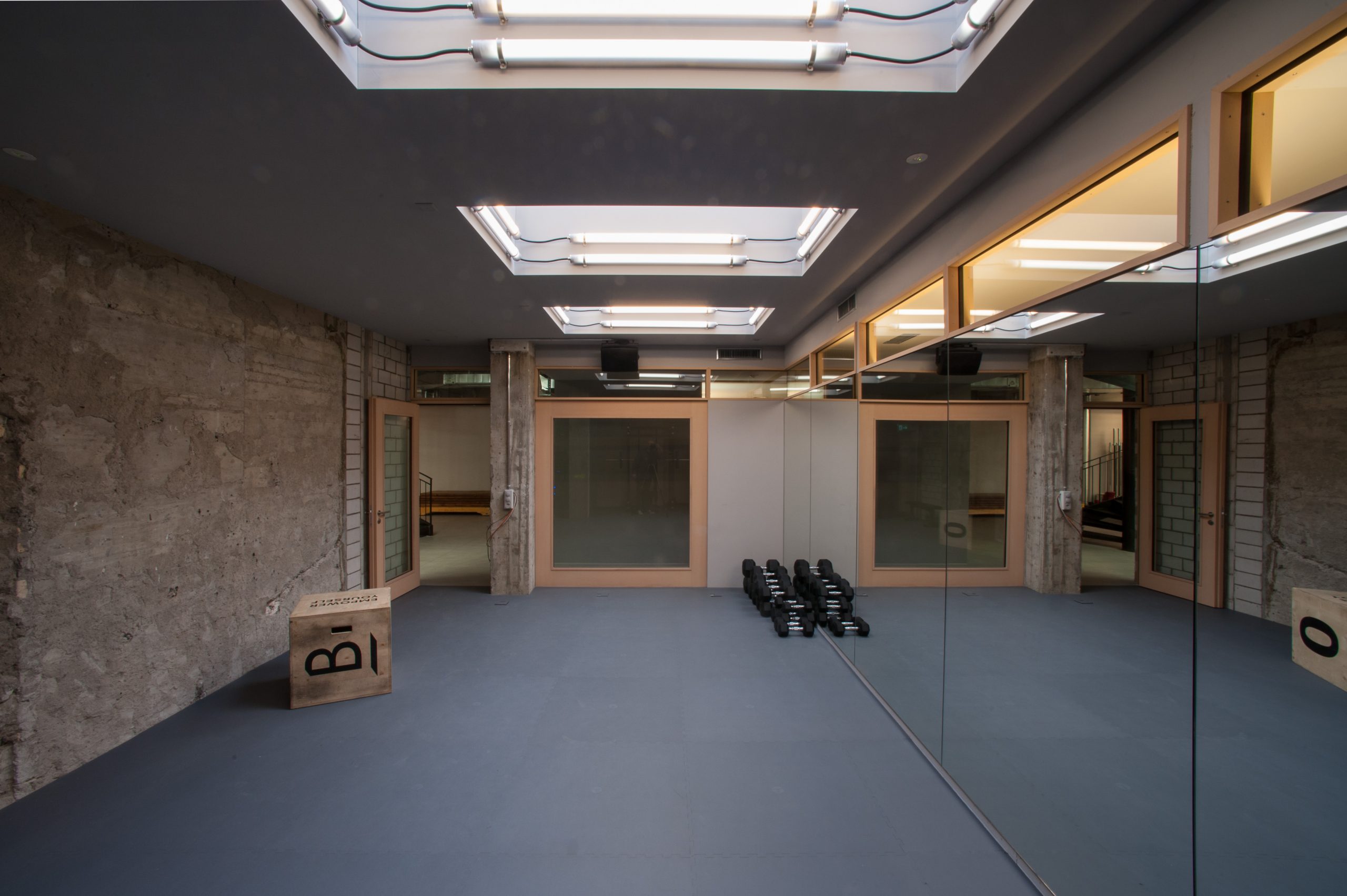 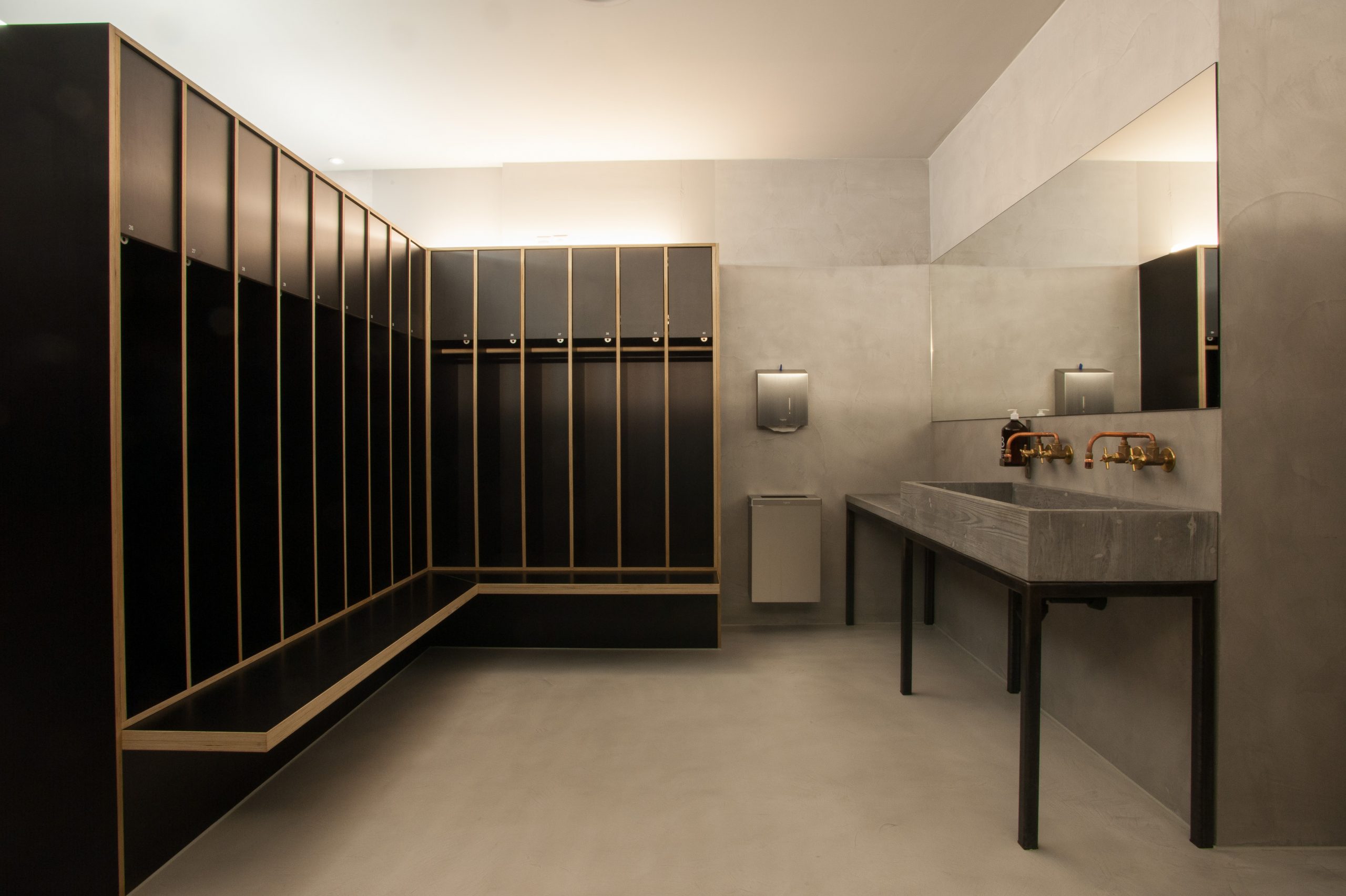 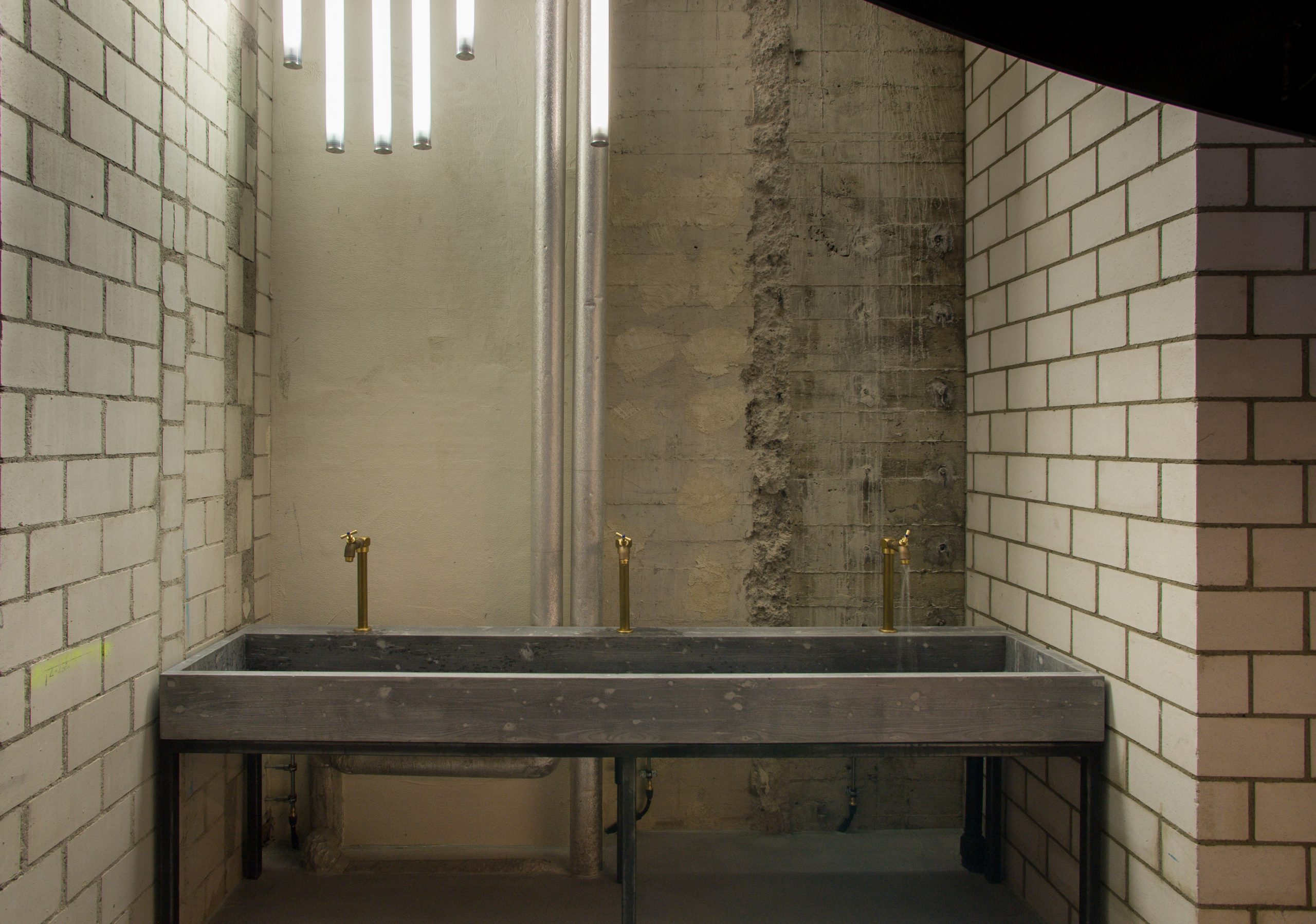 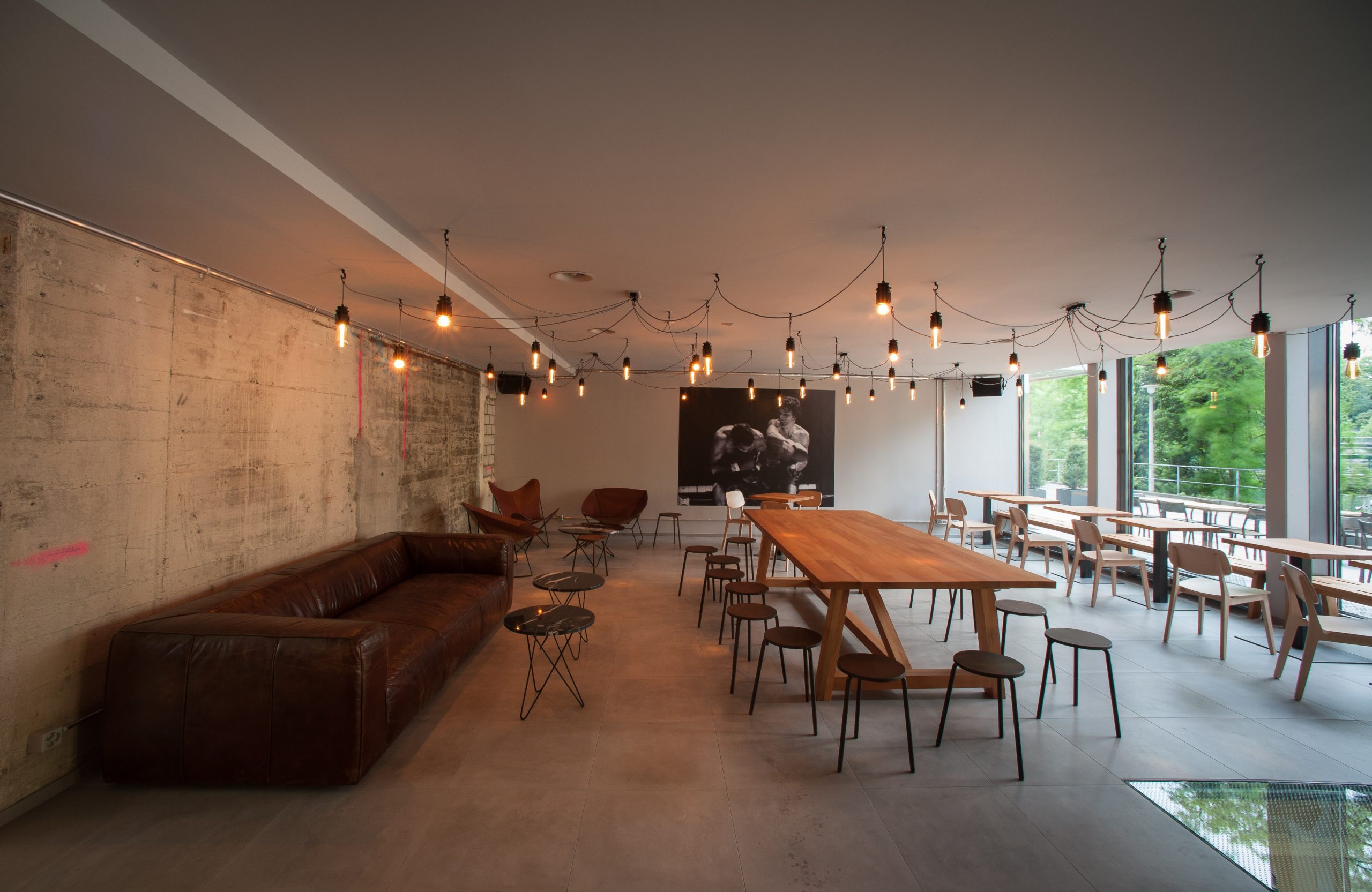 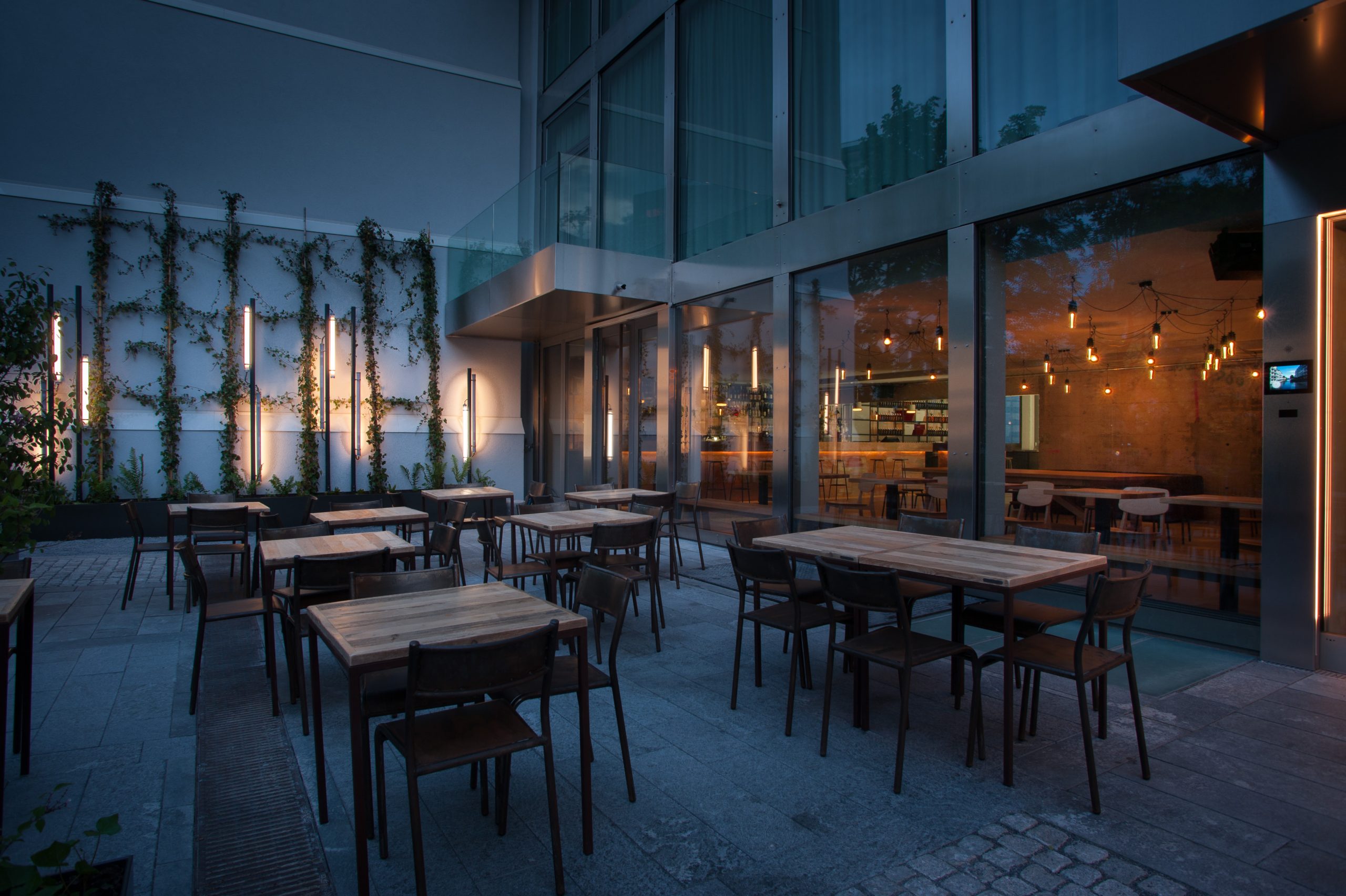 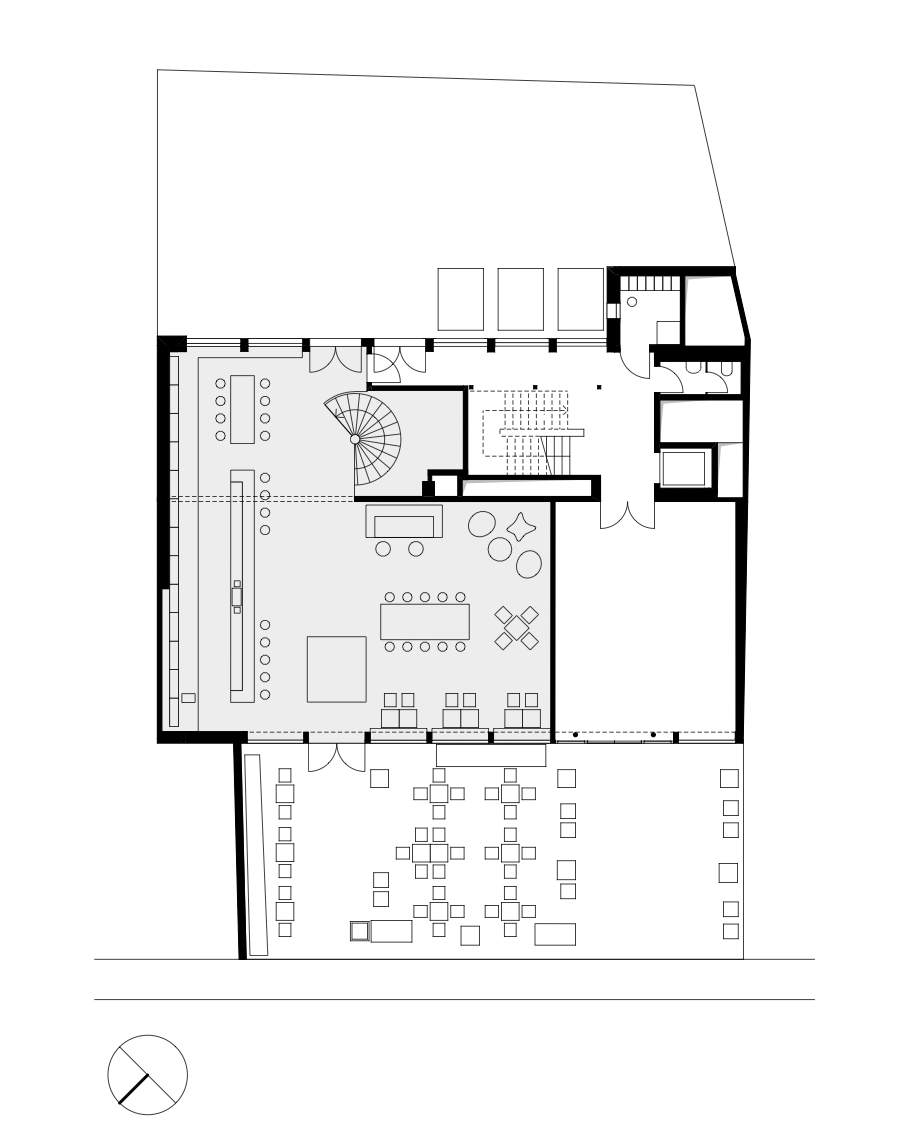 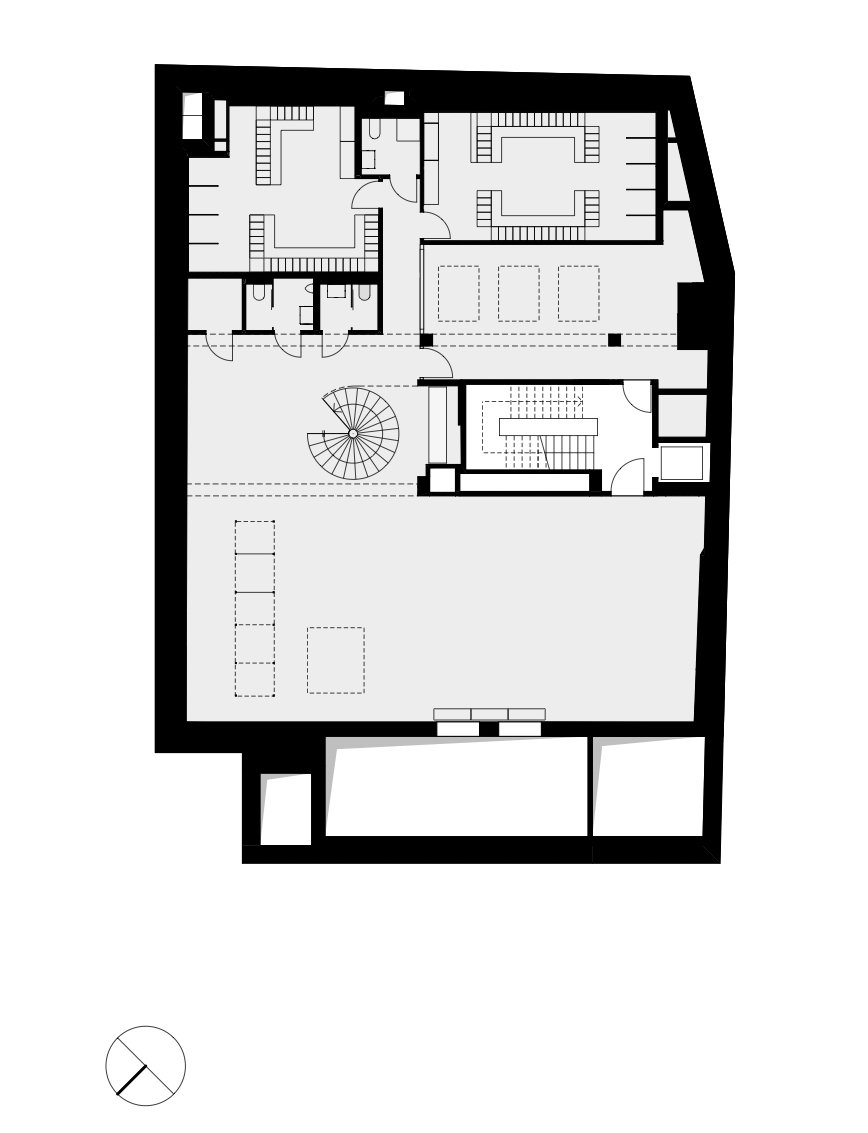 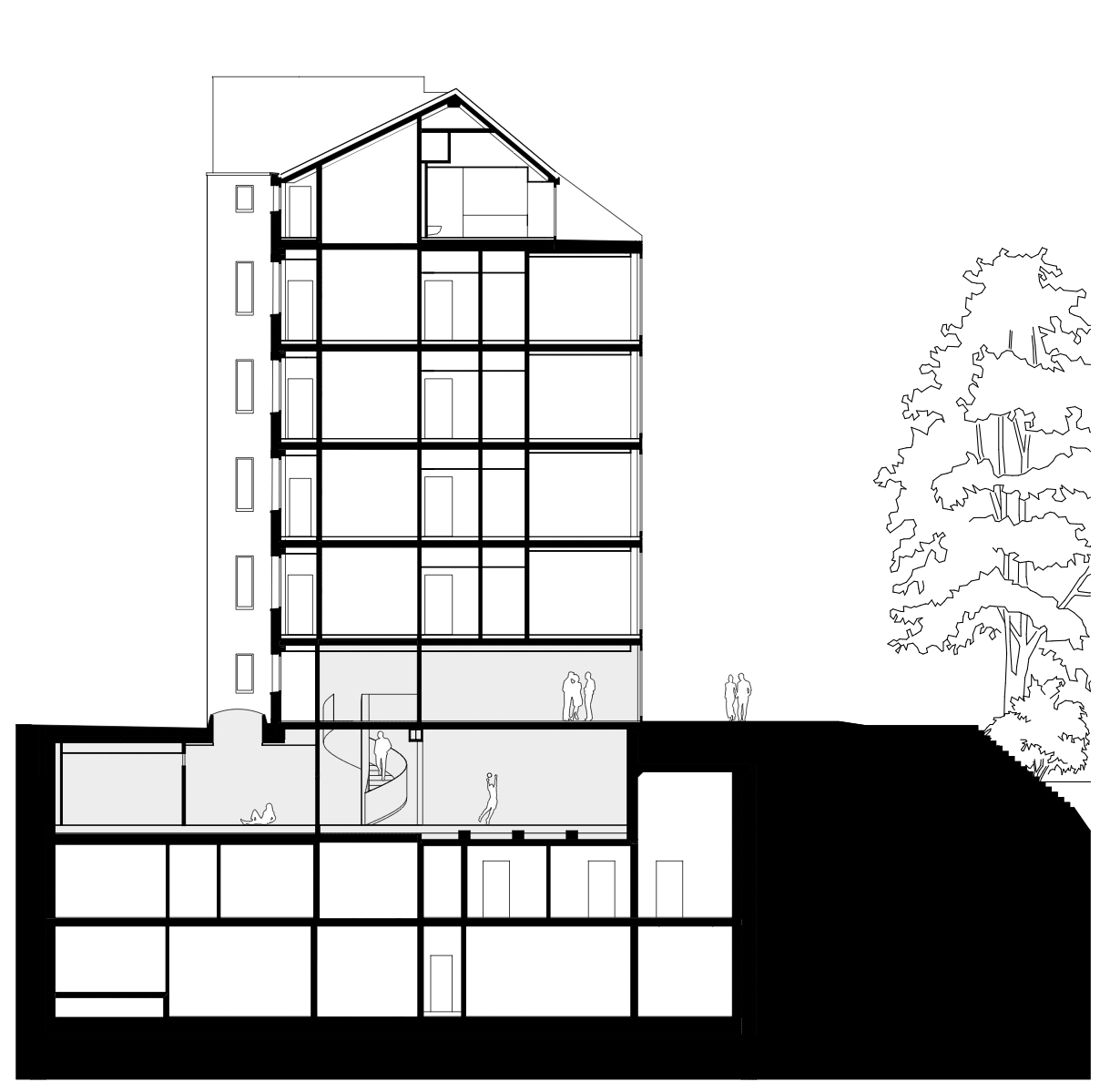 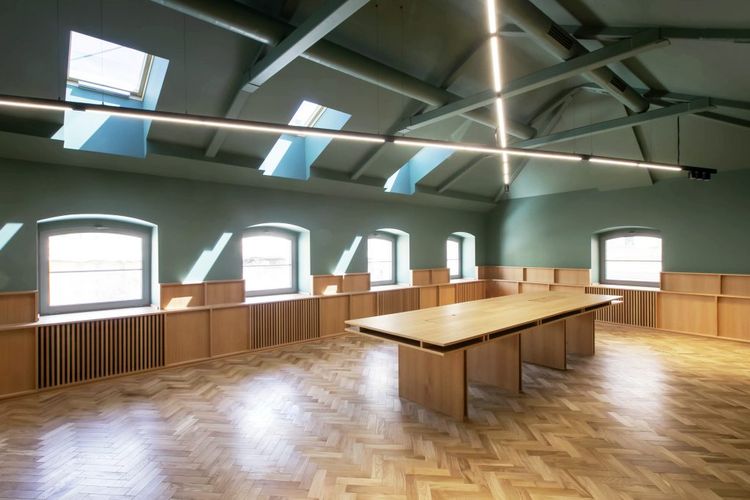